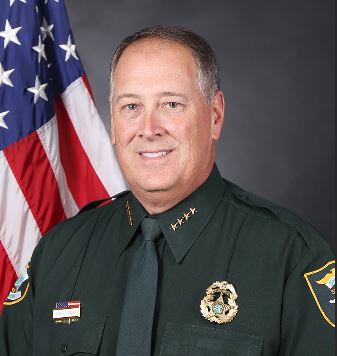 (Bradenton, Fla., Jan. 31, 2019) — Sarasota County Sheriff Tom Knight credits Manatee Junior College (MJC) now State College of Florida, Manatee-Sarasota (SCF) with both his personal and professional accomplishments. That’s a pretty big accreditation for a local college, but Knight is unwavering in his praise of the institution.

Knight, who grew up in south Sarasota County, chose to go to Manatee Junior College just after the college announced plans to build a campus in Venice. He planned to pay for college himself and wanted an affordable and convenient option. The new MJC location, which opened in a shopping center and was nicknamed “Brickyard University,” offered him the option he needed. “I had no plans to leave Venice,” Knight said. “Back then, you had to pay your own way or you didn’t go to college.”

His father, who worked in construction, asked Knight what he wanted to do after high school. When the future sheriff chose to go to college, his father gave his full support. To this day, Knight said he is grateful for his dad’s reaction and for the path that allowed him to take. Knight lived at home, attended classes, and paid for college by working in construction and delivering furniture.

Knight says he is also grateful “somebody had the vision to open classes in a shopping center,” rather than wait to build a campus in Venice. “As humbling as it was, it was a lot of fun,” Knight said. “The campus had a dirt parking lot, but it served the leadership’s vision to make education a priority.”

The sheriff took 80 percent of his classes for his associate in arts degree at the old Brickyard University. “It was fun because it was so tight-knit,” he said. “We were all in it together and we were one big family because it was small. The teachers were terrific including Dr. Jack Dale. He was a true visionary.”

He recalls Glenn Compton as a professor. Compton was “very interested” in the environment back then and Knight is impressed that he is still active in environmental causes. Compton’s dedication is just one example of the commitment his professors had for their work and what they taught.

Knight finished college at Florida State University (FSU) along with his future wife, Tracy, who he met while attending Venice High School. Although he proudly claims FSU as his alma mater, Knight credits SCF for putting him on the right path and helping him realize he could succeed in college.

“I remember going to Florida State my junior year and sitting in a class with 300 people. That was when I realized I missed home and I missed Brickyard University,” Knight said.

He believes some high school graduates can get lost going to big universities. “It is more intimate at SCF which makes for a better transition for new students.  The classes are smaller, you are still home, and you can continue some type of employment.”

Knight, who graduated college nearly debt-free, says he recommends SCF to students to this day. “For local students and adults going back to school, SCF gives you the opportunity to live at home and defer costs. The opportunity is unmatched and the campus is right here, in our own back yard.” 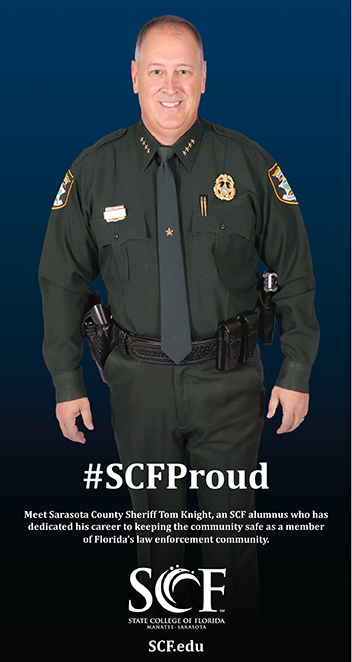