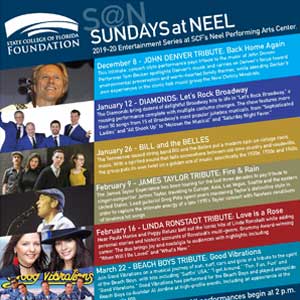 Sundays at Neel is a series of fundraising concerts that benefit SCF students. The series kicks off Dec. 8 with “Back Home Again: A Tribute to John Denver.” Performer Tom Becker spotlights Denver’s music while carrying on Denver’s focus on family themes and environmental preservation. Becker also blends his own experiences as a member of the iconic folk music group the New Christy Minstrels.