(Bradenton, Fla., Dec. 20, 2018) — Athletes from two sports will be inducted into the 2019 State College of Florida, Manatee-Sarasota (SCF) Hall of Fame in January. The 12th annual ceremony, which is open to the public, will take place at 6 p.m. Jan. 17 at IMG Academy Golf Club, 4350 El Conquistador Pkwy. Tickets to the social and dinner are $50 per person and must be purchased by Jan. 9.

The annual Hall of Fame induction ceremony has become the kickoff to SCF’s Homecoming weekend. The college, alumni and the community come together to honor the legends of Manatees and Lancers athletics. This year, alumni will compete in three sports on Saturday, Jan. 19. Visitors can come out at 10 a.m. to watch tennis and stick around for the 11 a.m. softball game and 2 p.m. baseball game.

This year’s hall of fame inductees come from SCF’s baseball and women’s basketball teams. They are:

Johnny Ard, who played for Hall of Fame coach Tim Hill Sr. and earned All-Conference and All-State honors while leading the team to a Suncoast Conference championship during the 1988 season. Ard, who passed away in Spring 2018, was drafted in the first round by the Minnesota Twins as the 20th overall pick. He was the first junior college player selected in the 1988 draft. Ard won 49 minor league games in his professional career.

Stephanie Dumas played women’s basketball for Hall of Fame Coach Wayne Stellfox from 1988-1990.  The power forward led the team in rebounds and steals in both seasons as a Lancer.  In her sophomore year, she led the team and was ranked eighth in the state with 17.6 points per game. Winning the Suncoast conference in both seasons, the Lancers qualified twice for the state tournament.  Dumas was named first team All-Conference and second team All-State. In a single game Dumas scored 41 points, pulled down 21 rebounds, had 11 steals, and 6 assists.  At the time, 41 points in a game was a college record.  Dumas turned down a scholarship to play at University of Central Florida to pursue a nursing career. She has a master’s degree and is a nurse practitioner.

Clem Freeman, who played baseball for Hall of Fame coach Bob Wynn from 1978-1980, led the nation in earned run average (.52) in his sophomore season and was named second team NJCAA All-American.  The pitcher earned All-State awards both years of competition. Freeman holds the SCF baseball record for earned run average (1.04).  Freeman was chosen to play on the USA All-Star team in 1980 where he was named the series’ Most Valuable Pitcher. He was twice drafted in the first round but chose to attend Florida State University. He earned All-Conference honors and signed with the Cincinnati Reds after one season at FSU.  He played four professional baseball seasons.

For information or tickets to the weekend’s events visit SCFManatees.com/Athletics/HallofFame or call 941-752-5261.

(Bradenton, Fla., Dec. 18, 2018) — State College of Florida, Manatee-Sarasota (SCF) sent a special envoy to local hospitals to cheer up children in the pediatric units and to thank the nurses, many of them SCF graduates, who care for patients over the holidays. Dr. Todd Fritch, executive vice president and provost, and Maverick the Manatee, SCF’s mascot, brought a basket of manatees – stuffed of course – to the littlest hospital patients on Tuesday.

This is the fourth year SCF visited local hospitals as part of its outreach to the community. Fritch, who joined the college this year, said it was a treat visiting the children and their parents to offer a little cheer. He and Maverick also got to enjoy time with brand new babies in the mother and baby unit at Sarasota Memorial Hospital.

This year’s visit came just a few days after 58 new nurses from SCF got their nursing pins, adding nearly five dozen much needed nurses to the local workforce. 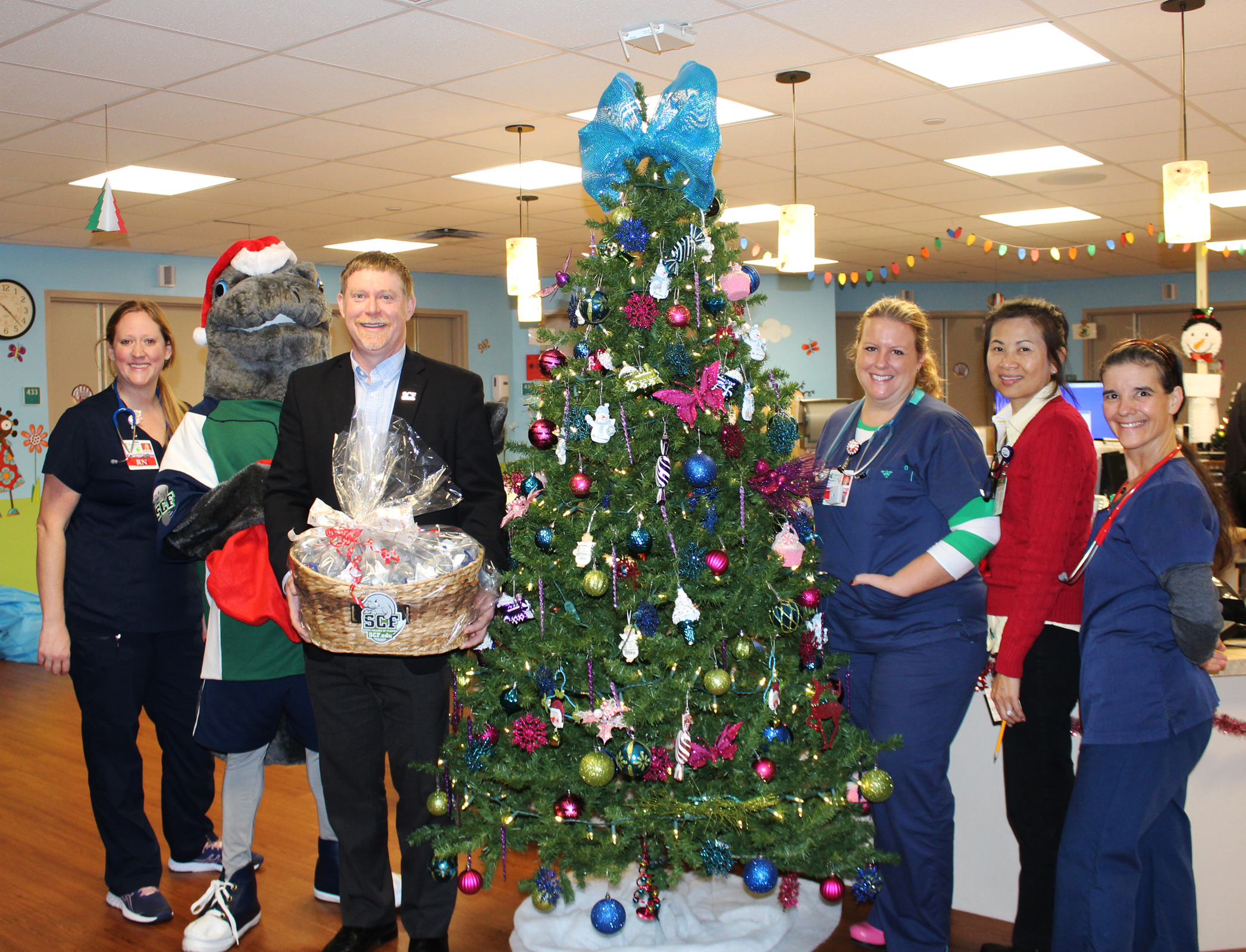 (Bradenton, Fla., Dec. 13, 2018) — For the fourth consecutive year, Venice American Legion NO-VEL Post 159 is donating the proceeds from its annual Veterans Golf Open to State College of Florida, Manatee-Sarasota (SCF). The money will be used to provide SCF Venice student veterans with individual $1,500 scholarships. Two scholarships are offered at the beginning of the fall and spring semesters for a total of $3,000 a year.

The proceeds from the golf tournament were $7,500. Combined with previous donations from the Venice American Legion, the proceeds will sustain the veterans’ scholarships for more than six years. The scholarships stay with the students until they graduate, if they maintain satisfactory academic standing. The NO-VEL post has donated more than $20,000 in direct support of SCF Venice student veterans for the past six years. SCF Venice serves more than 100 veteran and veteran-dependent students. All together SCF serves about 300 student veterans and their dependents.

The NO-VEL Scholarship is limited strictly to veterans attending SCF Venice. Anyone interested in helping student veterans may donate to the SCF Foundation Veteran Scholarship. 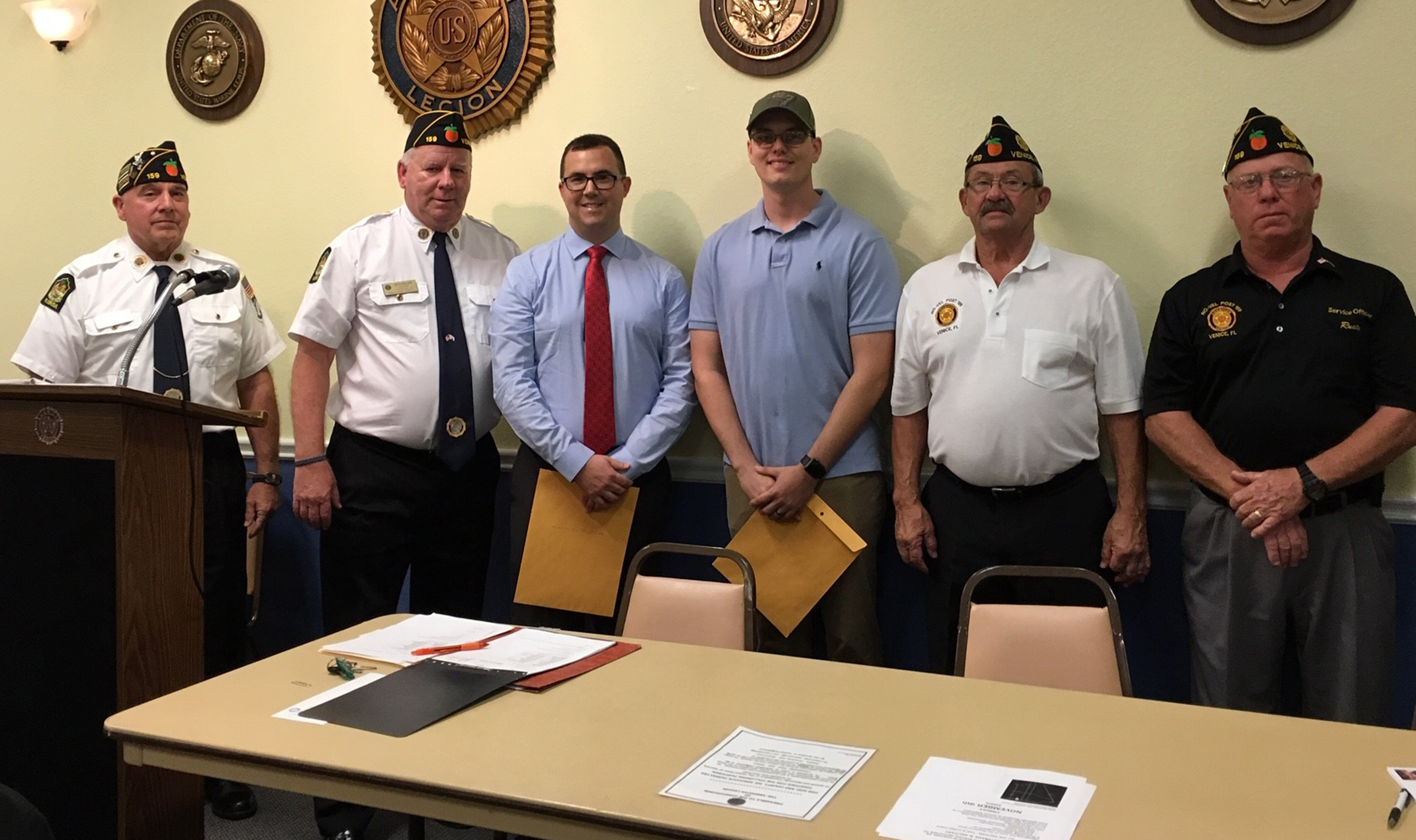